There Was No Bundt Cake Either

Doctor writes gender of twins on papers and puts in envelope.

Husband tells me, gender(s) will be revealed at Spare-No-Expense His &Hers Team Pink or Team Blue Baby Shower in November.

OMG. I hope we get invited to that. It will be like reality television. But, like, real.

I hope they have a bundt cake.

(Be careful what you wish for.)

Gender has not yet been revealed.

In between courses people play games like how quickly can you hang laundry on the line while carrying two babies and a cel phone.

No indication yet as to gender of babies.

Pink and blue balloons, pink and blue tablecloths, flowers, gifts and stunning display of all the communal gifts purchased with communal cash that would not look out of place in a royal nursery, except that the royal nursery probably already knows what gender babies are and is governing itself accordingly.

Plates of cake passed around with fresh berries.

All in pink and blue.

We have been here for close to four hours. Husband passed restless three espressos ago.

We have to stay. I plead. We have invested so much into this. We need to know whether these are boys or girls or both.

Two giant black balloons at the Head Table contain what I first thought were the slips of paper but then Husband pointed out deduced that must mini balloons inside, colour coded for Team Pink or Team Blue.

We are going to find out now.

I clasp Husband's hand just as DJ offers his announcement:

Listen. Husband says. The sun has set. It's almost 7pm. I can not stay in this room for one more second. We will have to find out another time whether work friend (that you have met barely twice) and his life partner (to whom you have just been introduced) are having boys girls or both.  You will need to get over this. 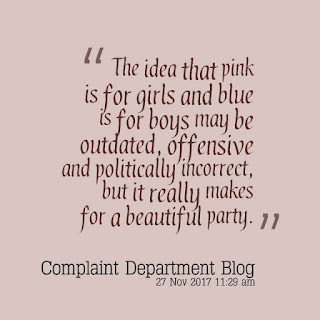 Posted by Complaint Department at 11:30